Dear Visitors,
Impression, Sunrise by Monet is on loan until July 7th to the Kunstmuseer at Skagen for the exhibition “Krøyer and Paris: French Connections and Nordic Colours.” .
We thank you for your understanding and wish you a nice visit.

The musée Marmottan Monet offers, from 28 January to 26 September 2021, the first opportunity to discover, in France, a group of major works by the Danish painter Peder Severin Krøyer (1851-1909).
The exhibition is the result of a three-year scientific partnership between the musée Marmottan Monet and the Skagen Museum (Skagens Kunstmuseer). This unique collaboration, under the High Patronage of Queen Margrethe II, will continue with an exhibition “Krøyer and France” at the Skagen Museum in 2022.

Krøyer was a portraitist, genre painter and landscape artist. All three aspects of his work will be present in the exhibition, which will reveal his features, those of his wife – in the 1890 double intimate portrait in the Skagen Museum – and those of his friends. His portraits are often integrated into landscapes – such as the splendid 1893 Roses from the Skagen Museum depicting his wife reading under a huge rosebush in bloom – or in interior scenes. This is worthy of one of his early paintings, painted in Vaux-de-Cernay, The artists’ lunch at Cernay (1879, Skagen Museum), when the young artist, a pupil of Léon Bonnat in Paris, frequented the realistic painters gathered around Léon Germain Pelouse.
This attraction to models never waned throughout the artist’s career and can be seen, after his installation in Skagen in the early 1880s, in the paintings that the Parisian public discovered at the Salon. The first, Fishermen of Skagen, Denmark, Sunset (1883, Skagen Museum) exhibited in 1884, earned him a medal from the jury of the Salon’s awards. The fishermen of Skagen, their families and children, himself and his friends in unexpected frames bathed in subtle light, were regularly the subjects of his paintings that journalists would admire on Parisian picture rails, such as the famous and touching Summer Day on the south beach of Skagen (1884, Hirschsprung Collection) or the astonishing Fishermen’s Group on the beach of Skagen in 1891, generously lent by a private collector, and to the infinitely poetic and nostalgic Summer Afternoon on the South Beach of Skagen (1893, Skagen Museum), a double portrait of his wife and their friend, the artist Anna Ancher, alone, walking on a narrow strip of sand between sea and beach that crosses the canvas to rise high into the horizon.
At a major Danish exhibition at the Petit Palais in Paris in 1928, one of the critics, referring to Krøyer, rightly defined him as a “lover of light”. Indeed, his entire work as a landscape gardener at the Salon was a long reflection on light colour and the role of light – a testimony to his interest in both naturalism and impressionism – at any time of the day and year. He knew how to make the eyes of Parisians, who were unaware of it, vibrate with this “blue hour”, a meteorological phenomenon that precedes twilight, which only unfolds on the far northern seashores but which will reveal itself to our admiration for a few months on the picture rails of the Musée Marmottan Monet.

Available in French
and in English : 3 euros 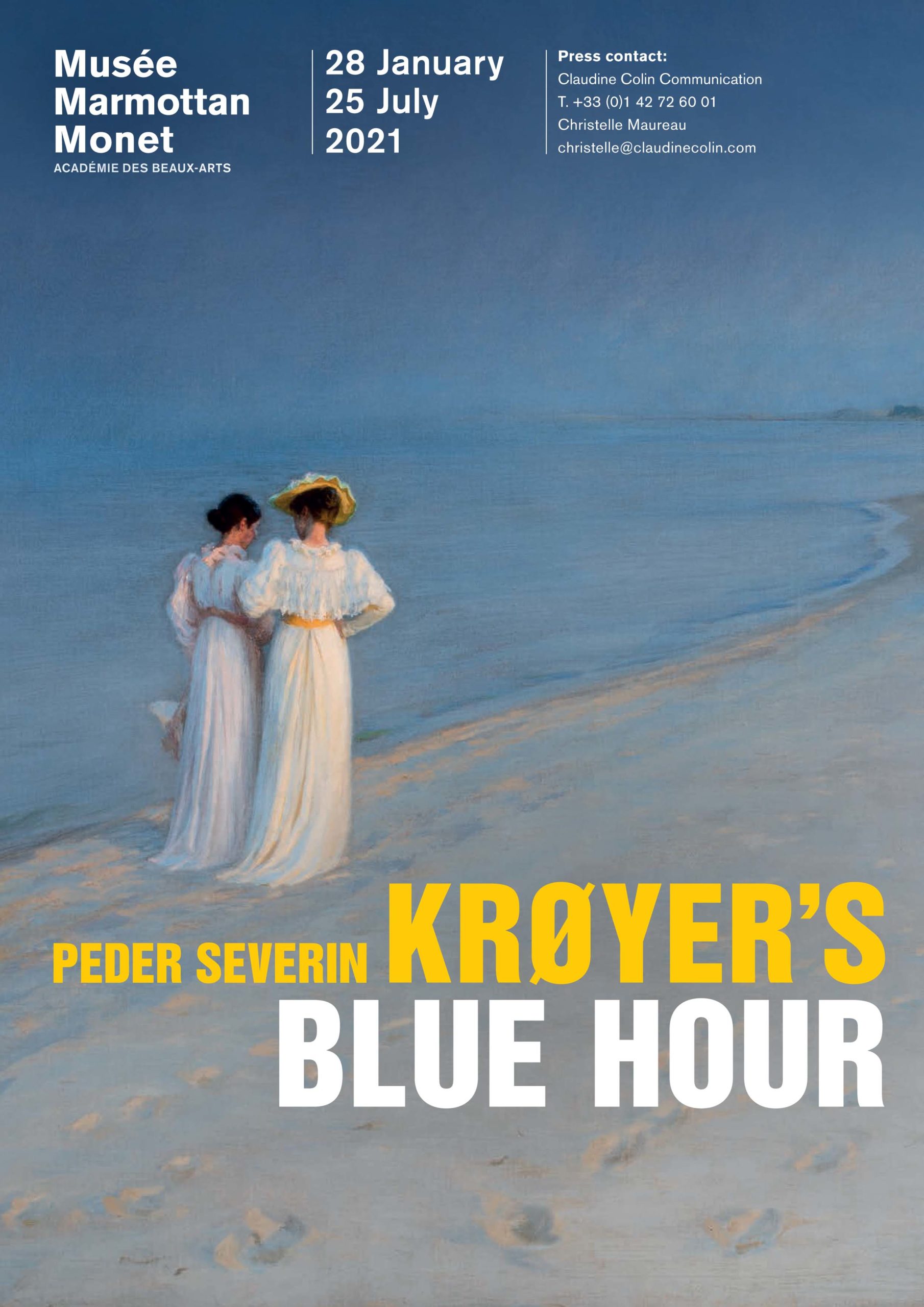